The answer is not as definitive as some might think. "Because every person, and therefore their body, is different, it can be challenging to pinpoint the exact amount of water someone should be drinking. Someone's height, weight, temperature, and activity change day to day, week to week, and no two people have the same routine or schedule," says Jay Woody, MD, emergency room physician, chief medical officer of Intuitive Health, and a co-founder of Legacy ER & Urgent Care.

How do you know if you're overhydrated?

The good news is that you're probably not part of the 1.7 percent of people living in the United States who suffer from overhydration or hyponatremia.

In fact, this condition is more prevalent in high-performance athletes and extreme outdoor sports enthusiasts due to their intense training schedules. Even though this demographic is most prevalent in being overhydrated it should not be limited to this group of people.

When is drinking too much water problematic?

The danger with hyponatremia occurs when too much water is absorbed into the bloodstream, diluting the existing electrolyte supply. As a result, says Knudsen, "it [overhydration] can lead to symptoms like nausea, vomiting, headaches, confusion, muscle weakness," which strangely enough like symptoms of dehydration.

Severe hyponatremia occurs when blood levels of sodium drip below 135 milliequivalents (mEq) per liter of blood.

Such as in the case of this hiker who, after a five-mile trek, lost consciousness and passed away because of severe brain swelling less than 24 hours later.

Since electrolytes are vital for such bodily functions as heart rate regulation and brain function, you can see why it's essential to maintain a good balance of electrolytes in the blood.

Previously we spoke briefly about severe overhydration. While a serve case could land you in the emergency room. Mild hyponatremia may be tricky as a person could be asymptomatic. Still, if you've been drinking a ton of water rather quickly. More than a liter an hour, these symptoms might come up.

How much water should you consume to maintain proper hydration levels?

The Centers for Disease Control and Prevention (CDC) doesn't offer official guidelines on how much water a person should consume each day. Although, according to a 2013 study, the kidneys cannot eliminate any more than 0.8 to 1 liter per hour.

A good rule of thumb is to pace water intake with the amount your kidneys can eliminate.

"An excellent place to start your daily water intake is drinking eight glasses of water from 8-ounce cups. Depending on the composition of their body, some individuals may require more water or less intake to retain body fluids," says Dr. Woody.

Still, according to a 2018 article published in the Journal Nutrients, the suggested daily water intake for adult males is 3.7 liters and adult females 2.3 liters.

Electrolytes are essential minerals that play a crucial role in hydration. Without them, cellular hydration isn't possible, and you can risk severe dehydration, cardiac problems, and even cognitive issues like brain fog, dizziness, and stomach issues like nausea.

Look on any electrolyte powder packets or sports drink, and you'll see a host of minerals and some salt. Your body needs both to function properly and retain enough water to keep you hydrated.

Speaking of sports drinks, some brands are laden with sugar, do these proclaimed electrolyte replenishers live up to the hype? According to Registered Dietitian Molly Knudsen, sports drinks have their place but only really for high-level athletes. "The carbs and sugars in sports drinks can be beneficial to keep them fueled during their activity," she says.

For those individuals who aren't high-level athletes but participate in vigorous workouts for less than an hour a day, Knudsen recommends a snack or meal instead of consuming a sports drink.

As your urine can range in colors from clear to dark brown, you must be aware of the meaning behind these ranges in color. Clear colored urine most likely means you're drinking too much water. Healthy urine color is yellowish to amber.

In most cases, a dark tint to urine would indicate dehydration. In rare cases, urine may be red or blue, caused by something you ate like food coloring or dyes or a bacterial infection.

It may be strange to consider that hydration isn't as simple as merely grabbing a glass of water. You may easily consume too much one day and risk depleting proper electrolyte supply. The next day may result in dehydration. One way to be sure you are staying properly hydrated is to use an accurate water tracker, like the The PÜL® SmartCap™ that is integrated with an algorithm specifically designed for you and your body! 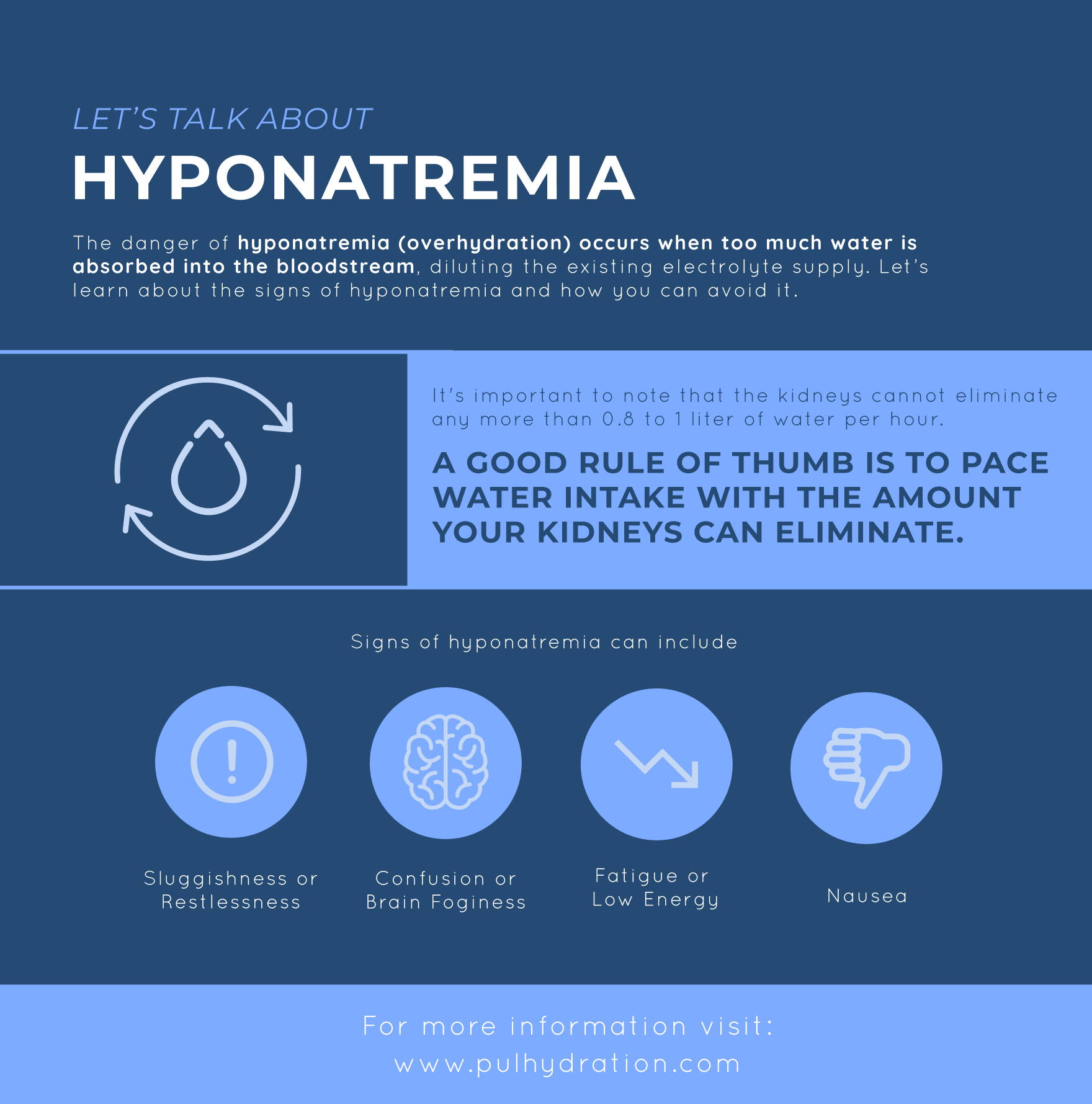