Didn’t humans just evolve to drink water when they are thirsty and that is good enough?

I used to be squarely in that camp. It makes sense. If more hydration was better for me, my body would tell me through thirst, and I would drink the right amount at the right time.

Over the last decade or so as I watched the water bottle become the ubiquitous companion to so many people. Runners and hikers began carrying CamelBacks and sucking water from tubes at the same time cubicle workers sipped from 32oz HydroFlasks and Yeti’s next to their keyboards. I wondered what happened to cause this massive shift in our collective view of hydration? And what’s the big deal about hydration anyway?

What started as a casual curiosity quickly became something of an obsession.   A good deal of my research took me to an organization called Hydration for Health and their scientific papers and partners - https://www.hydrationforhealth.com/en/. They are at the forefront of hydration research and have helped me to understand how humans have evolved to adapt to a wide variety of hydration levels and still function reasonably well.

To start, it seems there is little dispute that most humans spend a significant part of their lives mildly to severely under-hydrated with long and short-term deleterious effects.   And while most laymen don’t know the specifics, people almost universally agree that drinking water is “good” for you.

And more so, almost all of the experts agree that improving daily hydration habits is one of the easiest ways to significantly improve your physical and cognitive health. While it is clear that hydration is driven by habits that each of us learn, usually at an early age, it’s also clear that improving those habits, just like better dieting or exercise, is very doable and can have dramatic improvements on your health.

But how much water should you drink, what is the optimal schedule and how do I learn and create a healthy hydration habit?

First, a recap on the health benefits of drinking water

Water is THE most essential nutrient that humans consume.

Meeting optimum hydration status is the easiest path to healthy and effortless living. Why? Because up to 75% of the body consists of water and it’s one nutrient that supports the functioning of every cell, tissue, organ, and organ system in your body.

Here are some other reasons why you need to hydrate constantly throughout the day with a healthy hydration habit. Water works to:

How much water should you drink?

As convenient as it may be to follow a simple hydration rule that helps you meet your daily water requirement, your water needs are highly individualized. There are a lot of factors that may influence how much water you should and shouldn’t take. Some of these factors include: 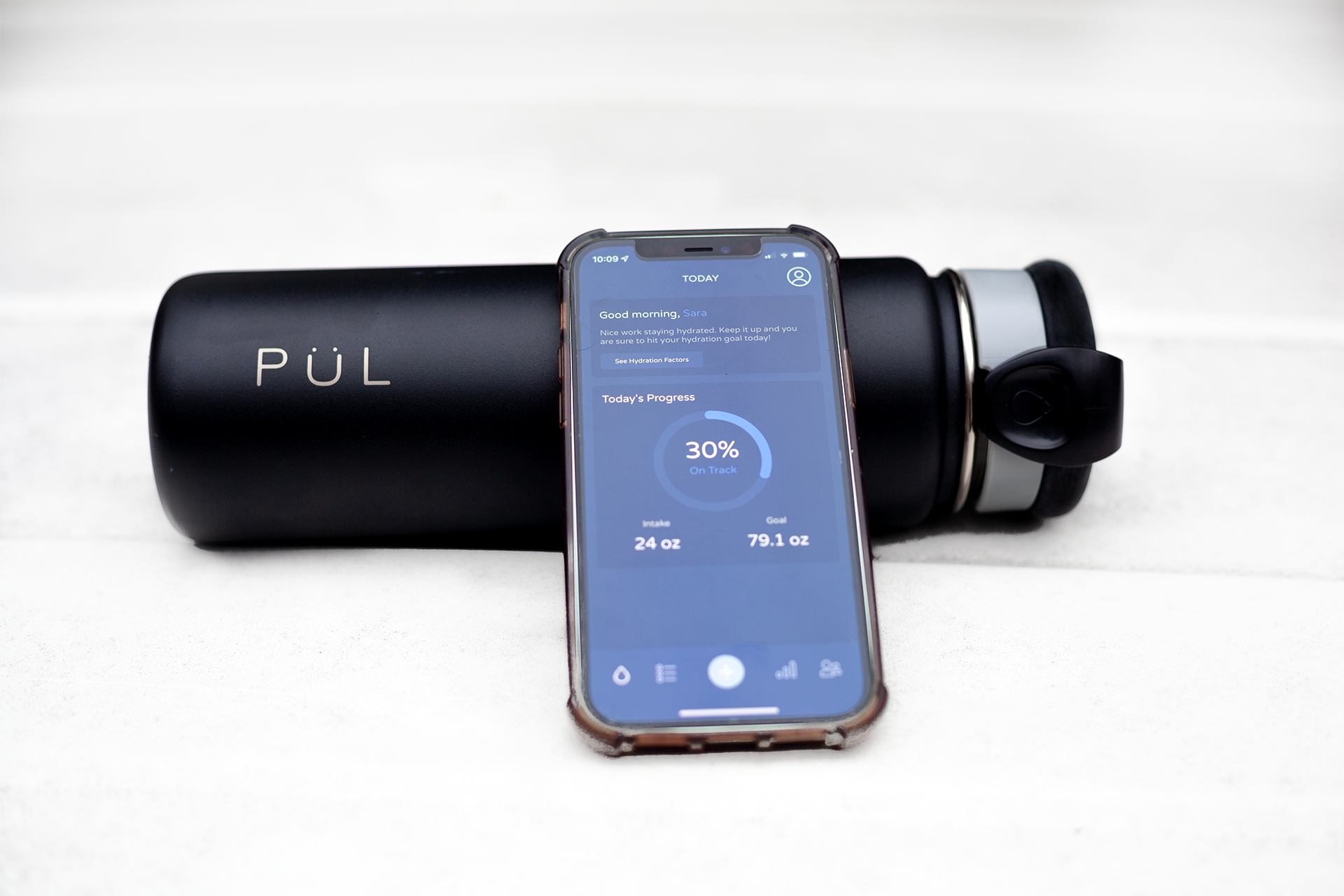 Why you should take water throughout the day

Since each of these factors will change throughout the day and by individual, supporting good hydration means regularly drinking water all through the day to replenish lost fluid. And also preventing overhydration by drinking too much water at once trying to “catch up”.

What are the effects of dehydration?

Dehydration happens when you lose more water than you consume, through vomiting, urination, sweating, e.t.c and you don’t replenish it to meet up with your regular body water content. Research suggests that even the mildest form of dehydration may trigger cognitive, cardiovascular, thermoregulatory, and metabolic performance changes.

Some popular signs of dehydration are:

The most obvious marker of dehydration, however, is thirst and dark yellow urine.

One solution: The PÜL SmartCap – to help you track and regulate your water intake.

By now, you may be confident that a healthy hydration habit is key to good health and longevity. But understanding your hydration needs all the time may be a daunting task. How do you keep up?

Here’s some good news: You don’t have to do it alone. The PÜL SmartCap pis your perfect hydration assistant on your journey to establishing healthy hydration habits. And it does all the work for you: PÜL’s SmartCap and hydration algorithm (Hydrithm) customizes a specific dynamic goal for you each day, and each hour, based on a variety of factors including:

Then it breaks this daily dynamic goal into small increments throughout the day and reminds you to drink through a variety of customizable notifications including the training LED on the cap which lightly glows red if you are behind your goal and then turns blue when you catch up.

Most users find that they have formed a new healthy hydration habit within a few days and they maintain it, even if the bottle is left at home or not available. Hydration is a habit and PÜL creates great hydration habits very quickly. Be sure to share what you've learned by utilizing our infographic! 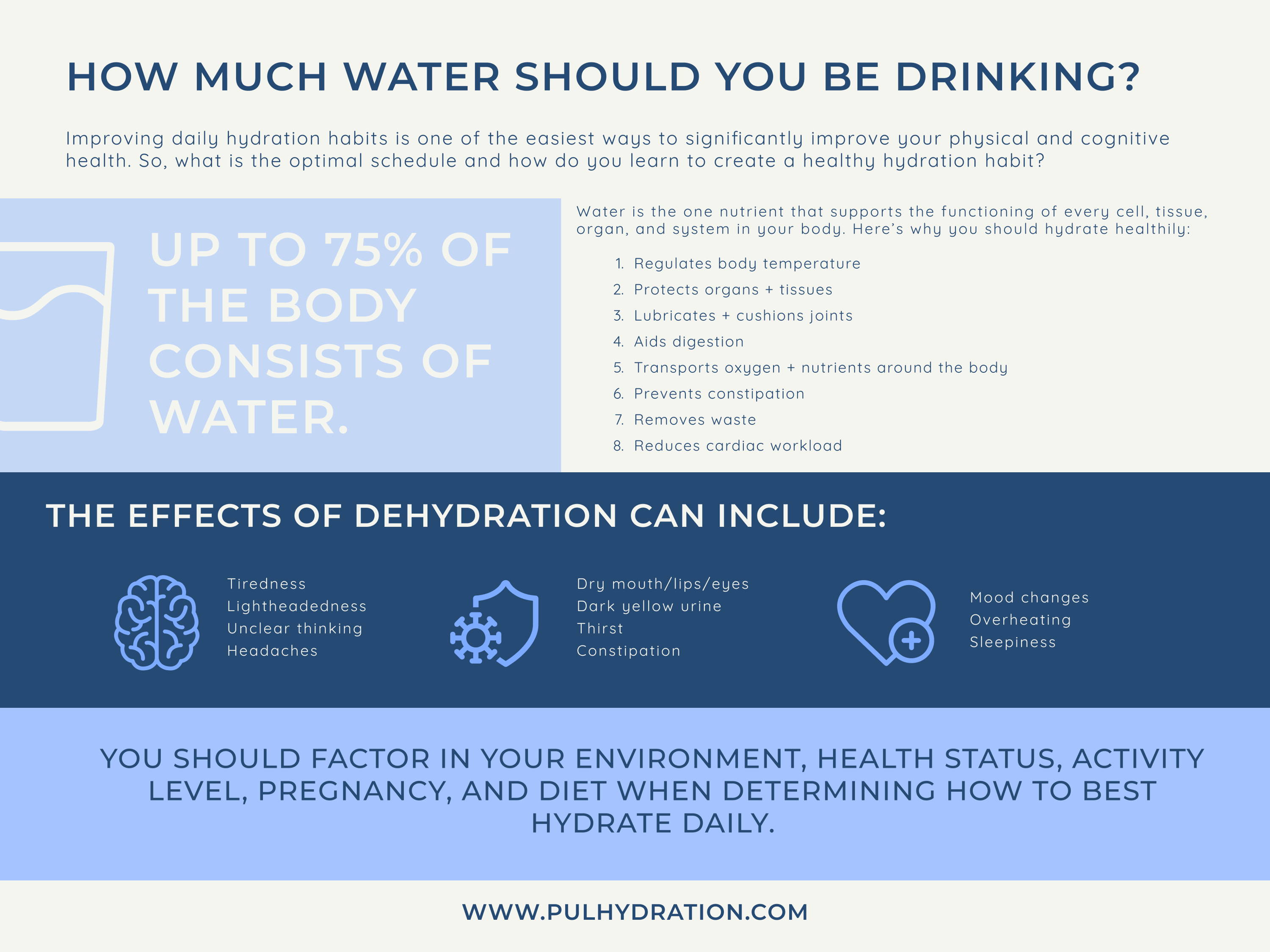