In recent years, more information has been provided around the topic of how hydration is more important than most people previously thought so. Including more hydration into your daily routine has become a hot topic within the general public. A common question that is raised often is, “how much do other drinks like caffeine and alcohol consumption affect your hydration?” You might be surprised at the answers.

If you’re one of the 85% of Americans that drink at least one caffeinated beverage every day, or you’re a habitual alcohol drinker, you may be wondering: How do they affect my hydration?

Well, it turns out that caffeine is not quite the hydration villain it was once thought to be, but alcohol is another story altogether.

Does Caffeine Dehydrate You?

If you’re a coffee lover (coffee is one of the two most popular caffeine sources, with research showing total daily intake worldwide to be 1.6 billion cups), you may have heard at least once in your lifetime that coffee can dehydrate you.

The truth is, this statement comes from a 1928 study that found that caffeine may be dehydrating because it increased urination in people who drank it. But many and more recent studies have invalidated this conclusion.

A review of ten studies shows that caffeine doesn’t cause dehydration any more than water does. And water is rehydrating. The review even mentions that if you have a higher caffeine tolerance, thanks to habitual intake, you’re less likely to experience body water imbalance from taking it.

In fact, according to a 2014 study, coffee contributes to your daily water intake, having “no significant differences” in its hydrating nature with water. And though coffee may increase sodium excretion, this doesn’t automatically increase urination. Another older study comparing the effects of caffeinated and non-caffeinated carbohydrate-electrolyte (CE) drinks on body water balance found that caffeine in CE drinks doesn’t impair hydration status. Similarly, another 2013 study shows that having approximately 7 servings of tea or 5 expresso cups of coffee doesn’t impact body water in healthy adults.

However, a 2011 study observes that caffeine at a dose of 4.5mg/kg increases urination in adults with overactive bladders.

Caffeine produces mild diuresis just the way water does. If caffeinated drinks are your go-to for getting your day started, you can rest knowing they won’t significantly dehydrate you.

Does Alcohol Dehydrate You?

The science is clear on this one—and is recognized as far back as the 16th century                                    (The Porter in Shakespeare’s Macbeth says that alcohol provokes three things: nose-painting, sleep, and urine.). Alcohol produces a severe diuretic effect and can be dehydrating. In fact, Alcohol is the most popular diuretic agent in the modern diet.

The more your alcohol intake, the more frequent your urge will be to pee. And this frequent urination means you’re losing more water than you’re replacing, leading to dehydration. It’s no wonder that alcohol hangover symptoms are similar to dehydration symptoms—headache, tiredness, increased thirst, lightheadedness, muscle ache, nausea, dry lips, mouth, and eyes.

Vasopressin is an antidiuretic hormone that regulates body-water balance. Although it’s usually released during mild dehydration to conserve water, alcohol suppresses this release, accelerating its dehydrating effects through urination.

Alcohol can lead to a body-water deficit, and knowing how it affects your hydration status is essential for controlling how much and how often you have it.

You can still maintain a safe drinking habit without compromising your hydration needs. Here are some science-backed ways to ensure your body always has the water it needs to function optimally:

Good sleep is essential for your health in many ways than you can imagine. And research suggests that a healthy sleep habit (plus regularly having 7 to 9 hours of sleep) may help you optimize your hydration levels.

Try not to drink on an empty stomach

To slow down the dehydrating effects of alcoholic drinks on you, try to have some food first. Eating may help reduce how much alcohol you’d want to have and slow down the rate at which the alcohol kicks in.

It’s always tempting to throw a glass of wine into your system for every situation, and you always can. But try to take it in health-friendly amounts. The Centers for Disease Control and Prevention (CDC) recommends limiting daily intake to two drinks or less for men or a drink or less for women.

Drink water consistently throughout the day

With hydration, taking water little by little but more frequently is always better than taking too much at once or none at all.

Be sure to share what you've learned today with others. Feel free to utilize this infographic to show what you know! 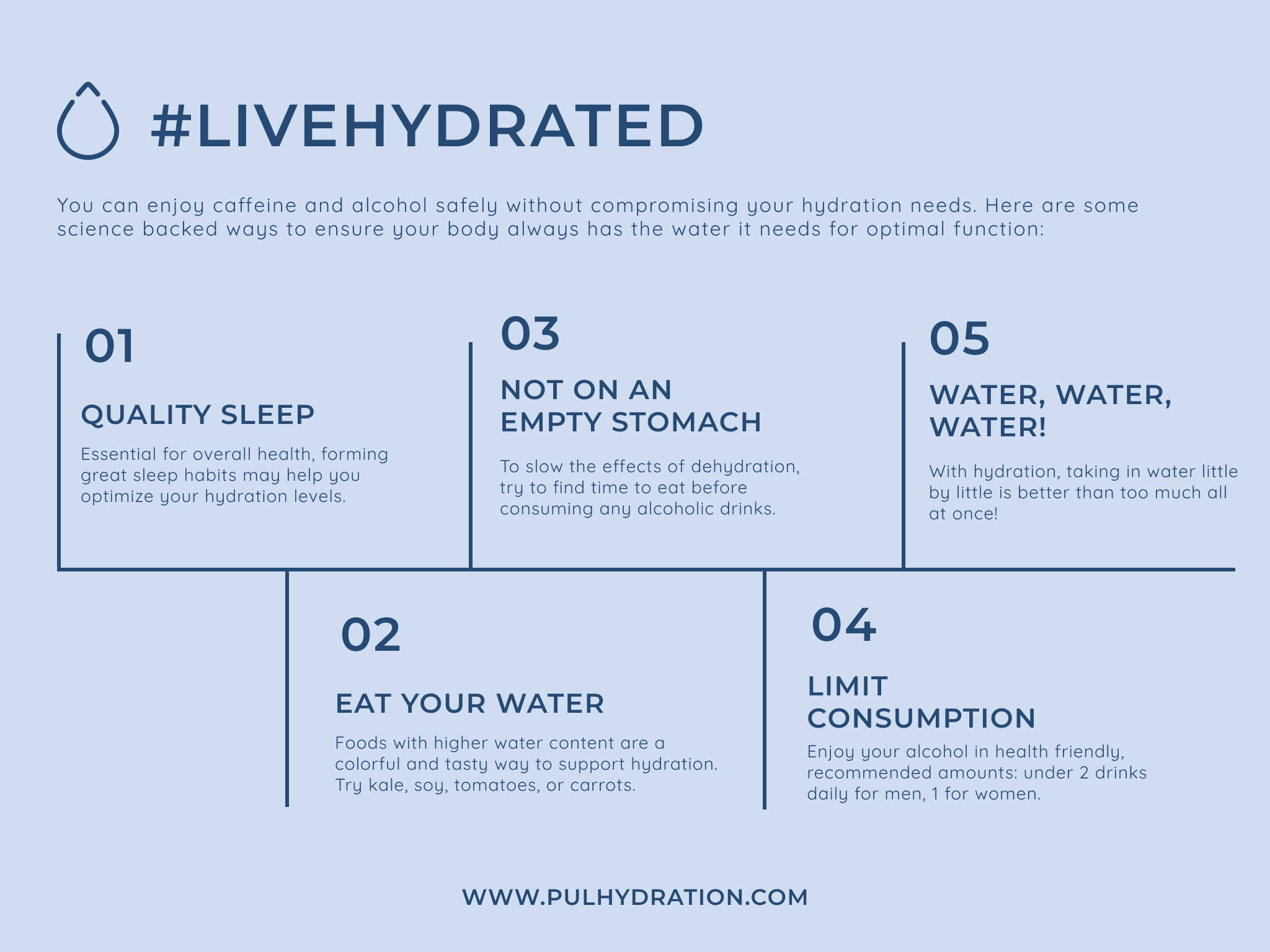